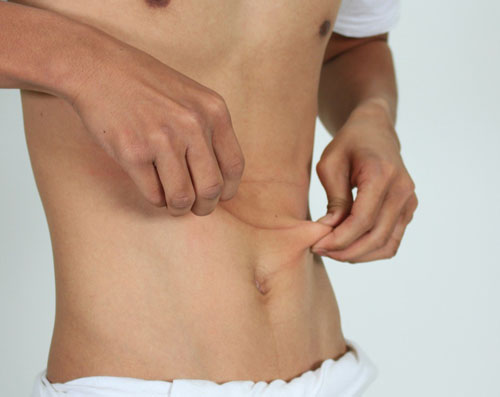 A hernia consists of the exit to the outside of an organ covered with peritoneum (membrane that covers the organs of the abdomen), which is usually part of the small intestine or the layers that surround it, through a defect or a hole that is Produces in the abdominal wall, just below the skin. This exit is manifested in the patient’s body as a kind of lump that is palpable and is perceived visually.

Abdominal hernias can be of different types: inguinal, umbilical, femoral or epigastric, among others, depending on what area of ​​the body they are in. In this case, umbilical hernias are those that appear, as the name implies, in the navel or around it.

Umbilical hernias, depending on their origin or etiology, can be of two types:

In general, all kinds of activities or health problems that increase pressure in the abdominal area may be susceptible to causing an umbilical hernia. On other occasions, hernias are present from birth, only they do not manifest until more advanced ages.

During pregnancy, the most common hernia that occurs in women is the umbilical hernia. Contrary to what one might think, umbilical hernia in pregnant women does NOT pose any risk or complication for pregnancy or for the fetus.

In pregnant women, umbilical hernias usually occur during the second week of pregnancy due to the increase in the size of the uterus, although it can also occur after giving birth, due to the great effort made. Normally, hernias are usually prior to pregnancy due to, as we mentioned before, a defect in the abdominal wall that in this case becomes evident due to the pressure exerted on the abdomen during pregnancy. As for the surgical treatment of hernias in pregnant women, they should always be operated once they have given birth, since complications could arise during pregnancy.

Symptoms of an umbilical hernia

Usually, umbilical hernias have no symptoms beyond the bulge or belly button. This lump is soft to the touch and, if we exert pressure on it, it is reintroduced inside the abdomen, although it will return to bulge when we stop pressing. In some cases, the patient may feel pain or burning in the area of ​​the hernia when making efforts in the abdomen, such as coughing, sneezing, lifting heavy objects, etc. When this pain manifests, the specialist usually recommends an abdominal girdle, especially for pregnant women.

In general, when the patient is at rest, the umbilical hernias do not cause discomfort. Those types of hernias that are too bulky for the hernia exit orifice may remain what is called “strangled” by the exit orifice. When this occurs, it can prevent proper blood circulation and even ischemia and necrosis in the tissue. Strangulated hernias should be communicated immediately to the specialist so that he can operate them urgently since they are very dangerous for the proper functioning of the organism.

Diagnosis of an umbilical hernia

When the umbilical hernia reaches a considerable size, its diagnosis by the specialist is easy, since it is easily recognizable by physical examination. It is also common to perform diagnostic tests such as CT or ultrasound for the diagnosis of smaller abdominal hernias, since larger abdominal hernias can be seen with the naked eye, although it is not usually done if there are no discomforts in the area.

For the umbilical hernia treatment in Delhi, the patient can take medications to decrease the pain caused by the hernia, as long as he has pain. It is important to consult with the laparoscopic surgeon in Delhi what medication is appropriate and how often it should be taken. However, the only and definitive treatment for umbilical hernia is the surgical operation, called hernioplasty and which consists of placing a surgical mesh of synthetic material with the aim of correcting the defect of the hernia. Hernioplasty can be done in two different ways:

As we have already said, surgery to eliminate umbilical hernia is the only effective hernia treatment in Delhi. If the umbilical hernia is not repaired correctly, it could be enlarged and cause more discomfort to the patient, even being able to strangle, which would require emergency surgery. Umbilical hernia surgery (hernioplasty) lasts approximately 30-40 minutes and does not usually present complications. The main advantage of undergoing it is the improvement of the patient’s quality of life and the elimination of symptoms completely. In addition, in this way, it will prevent it from reappearing.

The operation is performed on an outpatient basis, so the patient can return home the same day of the intervention by his own foot. Sometimes, for the patient to rest, hospitalization could be extended up to 24 hours. Normally, the total recovery after the umbilical hernia surgery in Delhi usually does not last more than four weeks after leaving the hospital. After this time, you can return to your daily activities as you did before the operation.