Achalasia of the Cardia

Achalasia of the cardia is a rare disorder of the esophagus that can occur at any age. It affects men and women equally. In most cases, there is no family relationship. Achalasia treatment in Delhi is effective in relieving the symptoms.

There is a muscular ring at the point where the esophagus and stomach meet. This is called the lower esophageal sphincter. Normally, this muscle relaxes when you swallow to let food pass into the stomach. In people with achalasia, this muscle ring does not relax so well. In addition, the normal muscular activity of the esophagus (peristalsis) is reduced.

This problem is caused by damage to the nerves of the esophagus.

Other problems can cause similar symptoms, such as cancer of the esophagus or upper stomach, and a parasitic infection that causes Chagas disease.

Achalasia is rare. It can occur at any age, but it is more common in people aged 25 to 60. This problem may be inherited in some people.

The fundamental symptom is the sensation of stopping food in the middle of the chest. It may occur abruptly but usually begins intermittently, not every day and only with solids. Later the difficulty also appears when swallowing liquids. It is usually accentuated with cold emotions or drinks and tends to get worse over time.

Regurgitation can be spontaneous when the patient lies down or during the meal. It can be confused with vomiting but, unlike this, the content is of foods that have not reached the stomach and therefore have no acidic, bitter taste of bile content. If the regurgitated material reaches the respiratory tract it can cause cough and even pneumonia or other pulmonary complications.

Another typical symptom is chest pain, usually as an oppressive sensation in the center of the chest that crosses to the back and sometimes ascends through the “tie area” to the jaw and even the ears. It can happen during or outside the meal, even during sleep.

Finally, weight loss is frequent in a variable amount that is usually related to the intensity of the referred symptoms.

The clinical suspicion is confirmed with complementary examinations:

– Radiology: At the beginning, contrast studies show only poor emptying of the esophagus, especially with the patient lying down. Later, the esophagus is dilated and its lower end is sharpened, with a “pencil tip” aspect. It is common to see food retained within the esophagus. In advanced stages, the esophagus, apart from dilated, becomes longer and more tortuous.

– Manometry: This test consists of measuring the variations of the pressure inside the esophagus. It allows us to see how swallowing does not allow food to be propelled into the stomach (swallows do not cause peristaltic contractions) and how the lower esophageal sphincter does not relax properly. This causes incomplete emptying of the esophagus.

– Endoscopy: It is not essential for diagnosis but to rule out tumors that mimic the symptoms of achalasia. Dilation of the body of the esophagus and resistance to the passage of the endoscope to the stomach can be seen.

It must be distinguished from other esophageal disorders, both motor and other, of systemic diseases (which affect multiple organs) and even tumors. These situations are more suspicious in elderly patients, with a very recent history (less than 1 year of evolution) and with a marked loss of weight in a short time.

The use of smooth muscle fiber relaxant medications (calcium antagonists, nitrites) only produces temporary relief and is reserved for very specific situations.

Intrasphincteric injection of botulinum toxin endoscopically achieves good results in 50% of cases, but its effects are transient (less than 1 year) and its use is also reserved for selected patients.

The two commonly accepted achalasia treatment in Delhi suggested by the laparoscopic surgeon in Delhi are endoscopic and surgical. Its objective is to reduce the pressure of the lower esophageal sphincter so that food passes to the stomach more easily, with excellent or good results in 80-90% of cases.

The endoscopic dilatation is performed by inflating a balloon at the junction between the esophagus and stomach, generally, are sedated and radiological control. Complications are rare (5%) but can be serious. The most important is a respiratory infection due to the passage of the esophageal content into the respiratory tract and the rupture (perforation) of the esophageal wall due to balloon inflation. In this case, surgery may be necessary to repair the tear. Although dilation is usually sufficient, in some cases it may be necessary to repeat the procedure several times. 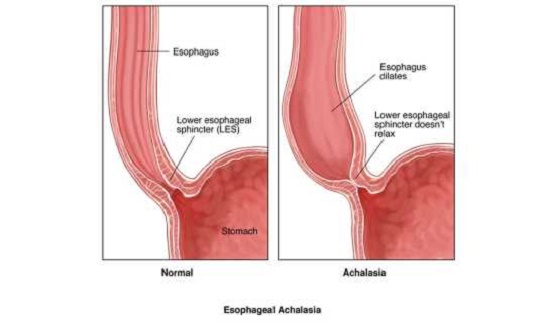 The surgical treatment called Cardiomomytomy is based on circular-cut circular esophagus (myotomy) in a variable-length (5-10 cm) muscle layer. It can be done by traditional surgery or by laparoscopy, which provides less pain and shorter hospitalization.

With both therapeutic procedures, there is a possibility that the sphincter is too open and gastric contents reflux appears. Both clinical and manometric, radiological and endoscopic reviews with an established periodicity are advised.