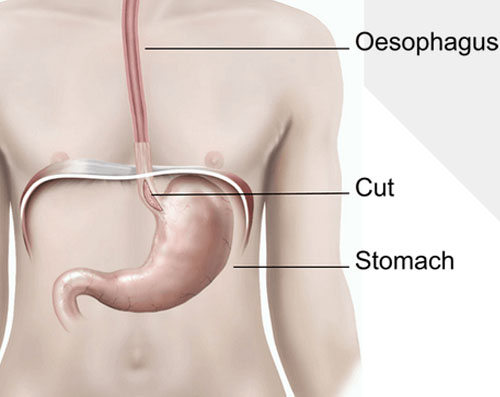 Laparoscopic cardiomyotomy in Delhi (Heller myotomy) is performed for achalasia. It is a safe, highly effective, minimally invasive treatment for achalasia. Achalasia is a rare disorder of the esophagus that can occur at any age. It affects men and women equally. In most cases, there is no family relationship.

The fundamental symptom is the sensation of stopping food in the middle of the chest. It may occur abruptly but usually begins intermittently, not every day and only with solids. Later the difficulty also appears when swallowing liquids. It is usually accentuated with cold emotions or drinks and tends to get worse over time.

Regurgitation can be spontaneous when the patient lies down or during the meal. It can be confused with vomiting but, unlike this, the content is of foods that have not reached the stomach and therefore have no acidic, bitter taste of bile content. If the regurgitated material reaches the respiratory tract it can cause cough and even pneumonia or other pulmonary complications.

Another typical symptom is chest pain, usually as an oppressive sensation in the center of the chest that crosses to the back and sometimes ascends through the “area of ​​the tie” to the jaw and even the ears. It can happen during or outside the meal, even during sleep. Finally, weight loss is frequent in a variable amount that is usually related to the intensity of the referred symptoms.

At the moment there is no treatment capable of returning the function of the esophagus to normal. The current ones are palliative and aimed at weakening the lower sphincter of the esophagus to relieve dysphagia, without favoring gastroesophageal reflux. The use of smooth muscle fiber relaxant medications (calcium antagonists, nitrites) only produces temporary relief and is reserved for very specific situations. Intrasphincteric injection of botulinum toxin endoscopically achieves good results in 50% of cases, but its effects are transient (less than 1 year) and its use is also reserved for selected patients.

The two commonly accepted treatments are endoscopic and surgical. Its objective is to reduce the pressure of the lower esophageal sphincter so that food passes to the stomach more easily, with excellent or good results in 80-90% of cases.

Endoscopic dilation is performed by inflating a balloon at the junction between the esophagus and stomach, usually with the patient sedated and with radiological control. Complications are rare (5%) but can be serious. The most important is respiratory infection due to the passage of the esophageal content into the respiratory tract and the rupture (perforation) of the esophageal wall due to balloon inflation. In this case, surgery may be necessary to repair the tear.

Although dilation is generally sufficient, In some cases it may be necessary to repeat the procedure several times. Surgical treatment is based on the circular cut of the circular muscular layer of the esophagus (myotomy) in a variable-length (5-10 cm). It can be done by traditional surgery or by laparoscopy, which provides less pain and shorter hospitalization.

It can fail due to an insufficient incision or due to scarring with fibrosis. With both therapeutic procedures, there is a possibility that the sphincter is too open and gastric contents reflux appears. Both clinical and manometric, radiological and endoscopic reviews with an established periodicity are advised.