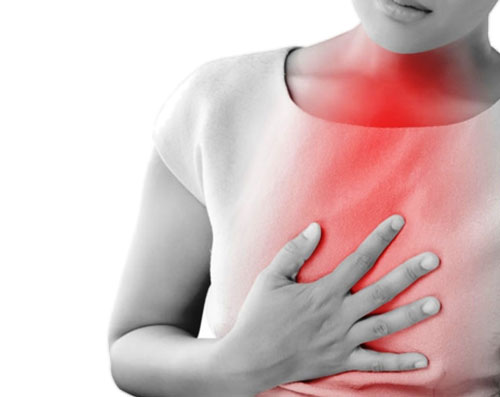 What are the causes of gastroesophageal reflux?

There are dietary factors or ways of life that can contribute to gastroesophageal reflux.

The existence of a hiatus hernia favors gastroesophageal reflux, although it is not its only cause.

All those situations that involve an increase in intra-abdominal pressure (obesity, pregnancy, certain types of physical exercise) also favor reflux.

What are the symptoms of gastroesophageal reflux?

It usually gets worse after meals, especially with foods that favor sphincter relaxation or with dietary excesses. In many cases, it also gets worse during nighttime rest or when the trunk is flexed.

In some cases the predominant symptoms are respiratory: aphonia or carraspera (due to irritation of the larynx due to refluxed acid) or even asthma or respiratory distress (due to aspiration of the acid into the respiratory tract).

What are the complications?

There are several complications derived from reflux, although these do not occur in most cases. They depend on the severity of the reflux in each subject.

The most common is esophagitis, which is the inflammation of the mucosa of the esophagus that is exposed to acid. There are different grades. Severe esophagitis can: ulcerate and bleed; Heal irregularly, reducing the diameter of the esophageal light and hindering the passage of food.

In some cases, a change of the normal esophageal mucosa may occur, which is replaced by a mucosa more similar to that of the stomach or the small intestine, more resistant to acid. This situation is known as ” Barrett’s esophagus ” and its main importance is that it is considered a risk factor for developing esophageal cancer.

These measures allow, in many cases, adequate control of symptoms:

Dietary and postural measures should be maintained despite following pharmacological gastroesophageal reflux treatment in Delhi since it has been shown that they help significantly to good clinical control of the disease.

Can it be prevented?

Nutrition plays an important role in the treatment and prevention of gastroesophageal reflux. Among the foods to avoid are sausages, alcohol, cheese, tea, coffee, tomatoes, citrus fruits, soft drinks, and fried foods. Milk, the “grandmother’s remedy” par excellence against reflux, actually favors it, since it is a high-fat food that could slow stomach emptying. It is advisable to eat slowly, chewing the food well to promote digestion and make 4 to 5 small meals a day. In addition, it is advisable to avoid going to sleep immediately after eating. Finally, you should avoid taking certain medications, such as nonsteroidal anti-inflammatory drugs and some anxiolytics that can increase gastric acidity, and wear clothes that are too tight.

In all cases, hygienic-dietary measures should be taken to reduce intra-abdominal pressure. Then treatment with drugs that are very effective in most patients will be indicated.

If all these measures fail, surgical gastroesophageal reflux treatment in Delhi can be performed to solve the problem definitively.

The laparoscopic surgeon in Delhi can study reflux through different diagnostic tests:

What is the treatment?

The drug treatment depends on the patient’s symptoms, especially their frequency and severity. Sometimes it is enough to take antacids, although in some cases it is necessary to block the acid secretion of the stomach. If there are symptoms of regurgitation, prokinetic drugs that increase esophageal motility may be indicated.

Surgery will be indicated in those cases in which there are serious complications arising from reflux or there is a need for high doses of drugs to manage the symptoms.

How long should the treatment be maintained?

In principle, reflux is a chronic disease and, as such, requires maintenance treatment, although this depends on the severity of the reflux and the existence of complications.

In general, mild and uncomplicated cases only require control of symptoms and the duration of treatment depends only on the discomfort referred by the patient.

Serious or complicated cases require maintenance treatment even if there are no symptoms.

When a long-term pharmacological treatment is necessary or in the case that very high doses of anti-secretory drugs are necessary, a surgical gastroesophageal reflux disease treatment in Delhi, called fundoplication, can be chosen and currently can be performed in most of cases by laparoscopy (minimally invasive surgery).